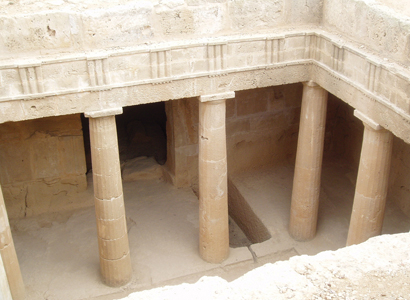 Situated at the geographical crossroads of Europe, Asia and Africa, Cyprus has been a strategic point of conquest for many great rulers. Throughout Cyprus stand proud ancient remains — the only telltale signs of conquerors who passed through centuries before. The Phoenicians, Assyrians, Egyptians, Persians, Romans, Crusaders, Lusignans, Venetians, and Turks - they have all made history here. Although they have all left the marks of their civilizations, it was the Achaens, in the late 13th Century B.C. who Hellenized Cyprus. The culture thereafter assimilated the influences of other civilizations, but retained the Island's Greek character and language.

As a result of its kaleidoscopic history, Cyprus has an abundance of fascinating historical and archaeological resources—from the Neolithic settlements to the bronze age cities, Greek and Roman Temples, tombs and theatres, Byzantine painted churches, beautiful cathedrals and crusader castles.

The town of Pafos is designated a cultural and natural treasure on UNESCO's list of World Heritage Sites. With a history that goes back thousands of years, Pafos was once the Capital of Cyprus.

Throughout the Pafos region, an infinite number of ancient sites carry the untold stories of past civilizations. Petra tou Romiou is the birthplace of the legendary Aphrodite, goddess of love and beauty. Nearby, in Kouklia, excavations are continuing at Aphrodite's Temple, the city and the necropolis.

Excavations are underway in Kato Pafos. In the house of Theseus, amazing mosaics have been discovered. Majestic, underground rock-chipped tombs dating to the 4th Century BC gave this area in Pafos the name, The Tombs of the Kings.

In Lemba and Kissonerga, two important sites of the chalcolithic period (3900-2500 BC) are being unearthed. An important Archaic settlement of the 12th Century BC, protected by a Cyclopean wall has recently been uncovered in Maa Palaekastro (Coral Bay). Excavations also continue at the site of the City Kingdom of ancient Narion and at the Ieronissos tiny island at Agios Georgios, Pegeia, nearby the proposed project. The area's natural beauty, its distinctive ethnic character and abundance of archaeological, historical and cultural attractions provides for the establishment of a unique residential and tourism destination resort.